Skip to content
Seoul’s weather is far too hot, and less humid than Singapore. Can feel the blazing sun. Thus decided to spam my sunblock which i bought yesterday from Innisfree. It is organic and water based. I used to have a non water base sunblock but i seldom use it because i dont like the feeling of it on my body. This water based sunblock doesnt feel that sticky and makes me feel fresh.
Not sure if spf 30 is enough but well, ive bought it already so shall just use it (:

We went to have 짜장면 for brunch. Woke up too late and finally left the guesthouse around 1pm. Talk about good life eh. sleep eat enjoy life 😀 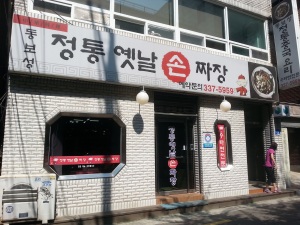 I have always thought that 짜장면  is a korean food until Pat told us that it isnt. The cups , chopsticks and restaurant setting was chinese styled which explains that it is a chinese restaurant.

The way they placed the menu was rather creative. Instead of having to pass their menu to customers, they had it placed under a large piece of glass, and the menu was placed on the table. So its like top layer is the glass, below the glass is the menu and below the menu is the tablecloth. 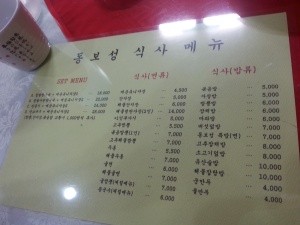 Din understand the menu so just let Pat choose and order for us. 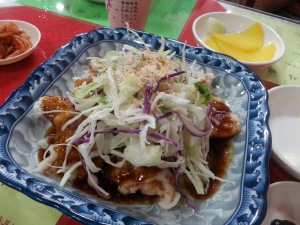 We had Sweet and Sour Pork. It was delicious.

우리 짜장면
Review: The bowl of 짜장면 was pretty huge, even i had trouble finishing it, yeah even a big eater like me. The noodle used… till now i still wondering if its actually pasta linguini . It was very nice though. The sweet and sour pork was also very nice.
Ratings: 5/5
After our brunch,  we went to the Hongik Free Market that was outside Hongik University. 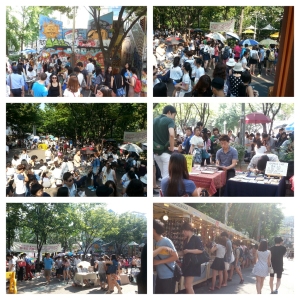 Here, the artists peddle their goods and had makeshift stalls. Reminds me of flea market at Scape, except that the goods sold at Scape were mostly non handmade goods, as opposed to here, most of the goods were made by the artists. I got myself a ziplock bag after much consideration and some persuasion from YH.
Before the persuasion, i walked around and kept thinking, if i bought the ziplock bag , what could i use it for?  Pencil case? I have alr. Makeup case? I have already.

After that, we went to check out Hello Kitty cafe. Initially we planned to visit the trick eye museum but it was far too crowded. So we decided to visit it on a weekday instead.

Before we reached, and while looking for the cafe. I had a feeling that it would be pink ,and it turned out i was right. In fact, the shop had so much pink that i couldnt stand the pink. Im not a fan of Hello Kitty at all, but merely went there so that ,hehehe, can make my hello kitty gfs jealous. MUHAHAHAHA! 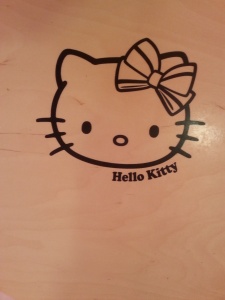 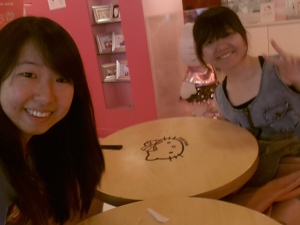 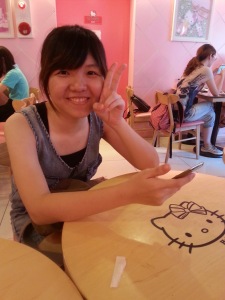 Act ge cute with the Hello Kitty. Be jealous of me that im at HK shop hehehe

Review: Im biased, cuz im not a fan of Hello Kitty, i wont come back again. The waffle was quite hard , not nice. If you’re just interested to come here to experience pink and hello kitty everywhere, do come. But if you’re coming for the food, maybe try other cafes instead for good waffles.

We had seafood kimchi fried rice for dinner at a nearby shop right infront of the band. 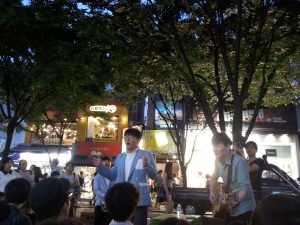 Then we went to watch street performance 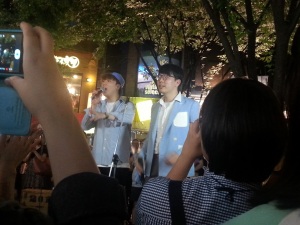 Super like the middle guy spontaneity and his way of engaging the crowds. 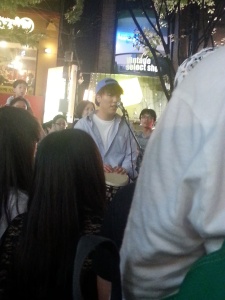 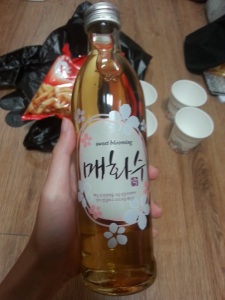 Decided to have some alcohol, enjoy our time